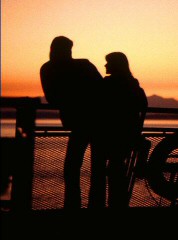 Now that we’ve examined many aspects of loneliness, let’s take a closer look at depression. The odd thing about this pair of monsters is that, in some cases, it’s hard to say which came into our lives first. They may come to call alone, but as time goes by, we can feel the heaviness and pain of both.

If we become lonely first, depression is a natural outcome of loneliness. But if depression appears first, loneliness will find fertile ground to grow, due to the habit of pushing people away and avoiding old relationships. Sometimes we are not the ones to reject friends and family. A chronically depressed person finds that others retreat, not wanting to deal with the complaints of the depressed. Others, at first, try to help by showing support or giving helpful encouragement though  over time, when they see that nothing they’ve said or done made any difference, they give up. They feel frustrated and angry that all the hours of listening and trying to help seemed  a waste. Nothing changed.

A friend of mine developed depression after he learned that the company he worked for filed for bankruptcy, and pensions were lost in the shuffle. He spent a big part of his savings on legal fees, to no avail. Too old to start over, he became very withdrawn and didn’t want to get out of bed. He said that lying in bed most of the day and night gave him a headache and his strength was dwindling.  His wife had medical insurance which covered him, so she urged him to get treatment.

This began with antidepressants and mood stabilizing drugs , which helped for a while, but over time, the effect wore off. Then he went to a psychotherapist and was helped a bit while he learned about dealing with thoughts and emotions. The therapist suggested focusing on the issue that bothered him most, which was losing the pension he’d worked for, and the anger and feeling of abandonment by a company he had been loyal to for so many years. Evidently secular therapists know the value of forgiving those who have hurt you, because he was encouraged to forgive and let go of the feeling of betrayal. Isn’t it amazing that in 2000 years since the Lord preached about forgiveness, it has become a hot topic among non-Christian practitioners? Recently, they’ve rediscovered the healing power of prayer and, another “breakthrough,” that a cheerful heart does good, like a medicine! Is this a “Back to the future” moment in time? The non-believing medical establishment should study the Bible, because it is full of such “breakthroughs”. But that’s no surprise to those of us who love the Bible. We’ve always known the Bible is The Maker’s Manual.

He went to a Christian counselor and was taught meditation. Along with a diet which prescribed healthy foods and supplements that naturally elevated his mood (more on this later!), he finally was regaining his mental and emotional well-being.

Relaxation response is a type of meditation that is easy and teaches you to completely focus your attention on one thing, perhaps a short passage in the Bible that is calming and comforting to you. You will breathe deeply in and out, slowly, while keeping that verse in mind, and repeat it over and over. If your mind wanders, don’t get upset, just let it float away while you stay on your verse. You could try this for a short time at first, and work up to 15 or 20 minute sessions. If you have high blood pressure, you could check your pressure before meditating and afterward to see if you are truly becoming relaxed.

The way the counselor taught him to meditate might be of some help to you, too. In a later article I will outline breathing exercises to relieve stress, depression, possibly lower your blood pressure, and give your lungs a good workout.

Meditation is a useful aid in good health. No wonder the Lord told us to meditate upon the Word, Christian men and women!  I’ve become aware of the healing properties of Christian meditation in recent years. I thought the benefit of meditating was a deeper knowledge of the Word, but I’m thankful to say we can also heal our minds and bodies while meditating.  Isn’t that just like the Lord, to give us a double portion, an unexpected bonus for being obedient! Meditating can also calm anxiety, post-traumatic syndrome and fight substance abuse.